I recently went on something called a “staycation.” As I was unfamiliar with the term, The Person With Whom I Was To Staycate (TPWWIWTS) described it to me:

TPWWIWTS: “Well, it’s like a vacation, only we’ll stay here in town. I’ve got us a room, and we’ll do fun things, like role-playing and stuff."

Dead Acorn: “Wow! That sounds like fun! I’ll bring my Legos® and my Spiderman® costume!”

TPWWIWTS: “Umm … well, I was thinking more along the lines of you going into the hotel bar about 15 minutes before me, and we’ll pretend to be strangers, and then leave together. And the fun things after will be more of an adult nature. There probably won’t be Legos® involved.”


We arrived and TPWWIWTS checked us in, while I laid low in the car so as not be seen by hotel staff, lest our ruse be regrettably rendered ruined. The room itself was what one would expect from a low-cost two-story convention motel near the airport. A microwave oven from the early eighties: 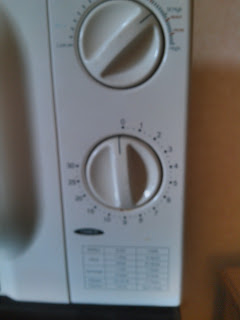 Above: How I miss the days before digital LED indicators.

It had oddly specific timing instructions for popcorn: 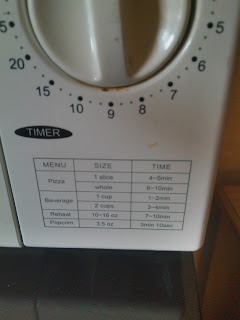 Above: Unfortunately, the rotary knobs don’t have half-second increments.

The fridge seemed newer, with a delightful can dispenser built in (TPWWIWTS couldn’t decide what to drink, and so brought some of everything - yes, that is an unlabeled bottle of moonshine). 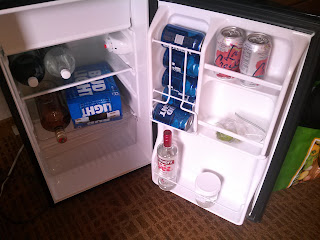 Above: Thank sweet jeebus that I didn’t have to take the time to reach into the box to slake my thirst upon finishing a beverage!

As it turns out, the microwave did serve a purpose, as the table that held the television was about 8” in height: 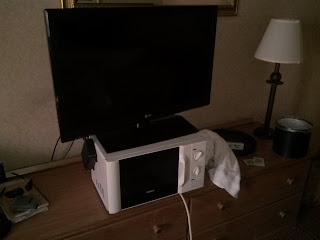 Above: TPWWIWTS can be quite creative at times.

After settling in, we decided to initiate our plan proper. I walked over to the main building … and walked back three minutes later.

*stunned silence for about thirty seconds*

DA: “I am NOT joking. They didn’t really explain – just that it’s closed tonight. They said there’s an Applebee’s across the street.”


So we held each for a while, then began the sad trek across the street for some grievance cocktails, comforted by the fact that the hotel restaurant was still open and we’d be able to have room service upon our return. Applebee’s was everything that one would expect in an Applebee’s three blocks from the airport, and we had a grand time with Dava The Nice Bartender, and, after a couple of hours, decided to make our way back for a late dinner and perhaps a game of Parcheesi or something.

After making our dining choices, I called the operator to order:

*stunned silence for about thirty seconds*

Operator: “I know, but they closed early.”

Operator: “There’s an Applebee’s across the street.”


So off we sauntered again, having changed clothes so that Dava The Nice Bartender wouldn’t recognize us (she wasn’t fooled, even though we sat on the other side of the bar). Despite all of the setbacks and diversions from our original plan, we had a pretty dang good time, and I can highly recommend trying a staycation yourself from time to time.

Some other minor highlights from the experience:

We got to chat with a couple of bands who were on a North American tour, and said that they did "an inspirational mix of hip-hop and rock & roll": 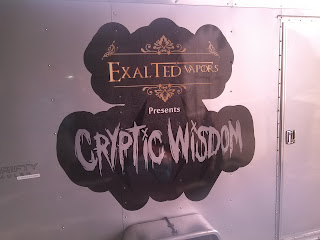 We were also introduced to perhaps the most disturbing corporate ... spokesthing, I guess ... ever: 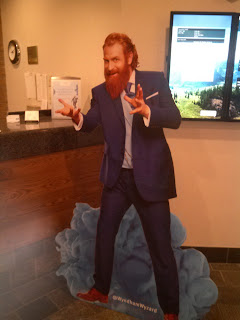 Above: No more sleep 'til the end of days.

You can play with your Legos® in your Spiderman® costume any time.

Hahaha! I've sure missed you DA :)

I never use the beverage dispenser in those fridges because it doesn't get my drinks cold enough. Of course, I put them in the freezer for a while before I drink them anyway, so I guess it wouldn't matter...

That spokesthing is TERRIFYING! Please tell me what hotel that was so I can avoid it!

That's the Wyndham Wyzard! He looks remarkably like a friend of mine - I sent him the pic, and he got quite the kick out of it. The wyzard even has a twitter account (@WyndhamWyzard). I don't think I'll be following him (mostly because I don't have a twitter account).

I think I'll just stay home and play with Legos in my unicorn onesie pajamas. That wizard looks like the guy from Game of Thrones, whose name completely escapes me, as I am still stuck on the fact that Applebees actually has a bar??? I may have misjudged Applebees....but I doubt it.


Lovely pictures, Maddy! My favorite was the last one, but I also LOVE dewdrop photography, so it’s a hard choice. ??


Thank you So much for this Important and Useful Information.Background Removal Service

People I Don’t Know But Who Seem Quite Nice